I’m calling on all the former presidents of the United States of America, who are physically able, to break with the time-honored tradition of remaining silent on presidential policy once they have left office. I am asking you on behalf of the American people, and the world, to join forces, to stand with our leading governors on the front lines of the Corona Virus, and offer counsel to President Trump as a united group of experts. He needs your insight and experience.

We are in crisis like no other, and President Trump is facing a different kind of enemy. There is no time to waste. The public does not need to be informed that such a meeting is taking place, it just needs to happen. We cannot ignore the scientists and their advice on how to beat the Corona Virus. Watching this virus spread throughout America and the world at such an incredible pace, leaving such death and destruction in it’s wake, is like watching Hitler’s forces invade country after country in Europe, believing that somehow it would not land on America’s doorstep. We waited too long to intervene in World War II, and the world paid too high a price.

The enemy is already here and we have to take this pause, we have to lock this nation down, uniformly, for a brief period, as all of the world’s experts are pleading for us to do. We have to do this now to defeat the corona virus for the safety of our nation and the world in the long run. Watching a piece meal , ad hoc plan, that will allow our hospitals to be overwhelmed, will devastate our medical professionals, and leave our population to be culled, is simply unacceptable. Anything less than fighting with our best scientific, technological and logistical strategies is essentially aiding and abetting a genocide. There will be no second chances. It’s that simple, but our current president has had no public policy experience prior to his presidency. He needs to be convinced of the eventuality of unimaginable loss of human life without action. Our state governors need support and direction immediately.

Your combined experiences in crisis management, the Iran Hostage Crisis, 9/11, Hurricanes Katrina and Sandy, SARS, Ebola, the economic crash of 2008, all give you a level of credibility and experience that no one else in the world possesses. I believe that President Trump will listen to all of you as a whole. I believe that he will listen to the advice coming from you, delivered in a way that only former U.S. presidents can. We have trusted all of you with the fate of our nation before and we need you to come to service again. 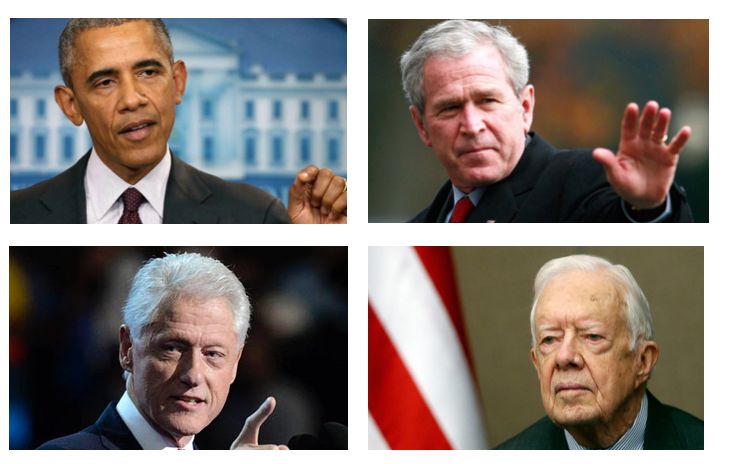