For an entire generation of black people in America, there are memories seared into our minds, of sitting in front of the television with our families and watching the films Sounder, The Autobiography of Miss Jane PItman, and of course, one of the greatest network television events ever, the mini series adaption of Alex Haley's book Roots. All of these great works told the stories of our black experience in America, of our ancestors, and yes, they all dealt with American slavery and the period of Reconstruction in some form or fashion, and all of these productions starred Cicely Tyson. She made many more films, and played many characters that were not period pieces set in the American South, but she didn't make nearly enough films showcasing her range, I believe largely because of the times she lived in. She didn't have the kind of culture, the support systems, or the options that a Viola Davis , or Shonda Rhymes, Kelly Washington, Isa Ray, Jada Pinkett-Smith, Cynthia Erivo, or even Ophrah now have. She gave those women those options. She did it by opening that door just a little wider, by bringing her best self, her "A-game" to every role she played. She did it by being an example and a role model. And she made us, as black people, feel proud. Setting aside her actual performances for a moment, her greatest accomplishment might have been her ability to make us as black people, feel good about ourselves, by validating our collective and individual experiences, in a time when we needed it so badly. She raised us up through the power of her work.

In a time where we were so seldom portrayed with depth, honesty, or dignity in film and television, you could always count on Cicely Tyson to be genuine, convincing, true, and yes, you knew that whatever the role was, and even with the limited options that she had for an actress of her might, she was still going to make us proud. I'm teary eyed right now, as if I'm saying good-bye to one my favorites aunts. She has been a kind of spiritual and actual cinematic matriarch for so many of us. Cicely Tyson's performances brought me such inspiration in my childhood. It helped me bond with my family, and my history. Her work, her example is part of the reason I knew that I could become an actor and a performing artist. She showed me how to do it with dignity, power, and grace, with commitment to the craft, and to the responsibility it carries. We will never forget you Cicely Tyson. You are a part of us. Thank you for al that you have give un. Rest in Power. 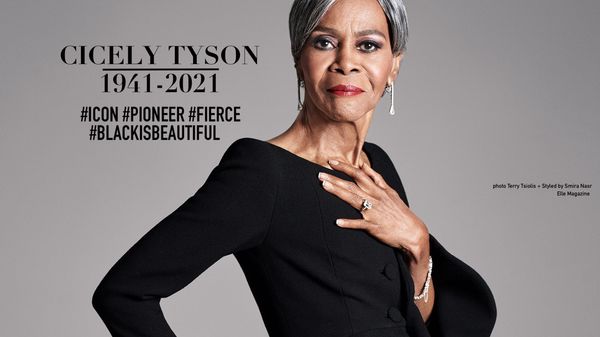