I’m thinking about the recent passing of actor Nichelle Nichols and basketball giant, and intellectual, Bill Russell, today. These stars while aspiring to their own personal best, helped all of us usher in a new age of accomplishment, acknowledgement, excellence, and recognition of African Americans in the popular culture of the 60’s, and 70’s  Their work and the impact of their lives is reverberating today in part because everything, and I do mean everything, is in the cloud and because they were iconic. They are from a period in American history, a pivotal period, that will never be repeated in the same way in America.  It is not an overstatement, they were pioneers for all of us.

I am a Trekkie. Full stop. Nichelle Nichols as Lt. Uhura and her cast mates, under the direction of the amazing Star Trek writers and creator /storyteller,  Gene Roddenberry, they are my childhood superheroes.  Star Trek changed my life for the better. As a young boy who’s imagination was wide open, they helped me to dream big dreams that would inform and empower me to this very day. Not unlike Sesame Street, Star Trek gave me regular lessons on morality, ethics, civics, politics, technology, evolution, religion, race relationships, war, peace, and perhaps most importantly,  empathy.  Star Trek let me believe not just in the possibility of meeting beings from all over the galaxy and not just in a future where we would do almost everything in seconds with small devices called “communicators” and “tricorders”, but Star Trek helped me to believe in concepts even more powerful….intergalactic cultural exchange, intergalactic diplomacy, intergalactic integration, and intergalactic peaceful coexistence.

The crew of the USS Enterprise were very passionate engaging humans. They had purpose, drive, and ambition. They had pledged to a code of conduct, a mission statement, "to boldly go where no man had gone before" and to the "prime directive" banning interference in the development of any culture they observed.  They were also highly amorous and sexual gtoo.  Members of the Federation regularly fell in love with aliens or reaccessed their concept of love asa direct result of contact with aliens.  In the first episode of Star Trek, called the cage, the first captain of the U.S.S. Enterprise, Captain Pike, stayed on a planet, after an injury left him paralyzed, wheel chair bound, and unable to speak,  to live out his life through his mind using alien telepathic technology that created an enhanced version of himself where he was young, free, and virile. With this ”Talosian”  technology, he was able to live out his last years in happiness with a woman he loved, who was also injured and deformed in a space crash years prior to the Enterprises encounter with the Talosians. She too, was liberated by the same illusion fly way of the alien tech, making her feel young, beautiful, and unimpaired. Their entire romance took place in their minds.   Captain Kirk had no issues with his passion for the green or blue-skinned ladies and females he encountered from different galaxies.  None whatsoever, no…quite to the contrary. He saw beauty and sexuality everywhere. The Enterprise’s second captain, Captain James Tiberius Kirk let the power of love do its thing.  Wow...

Star Trek helped me process the idea that we really could take a “do no harm” approach as a guiding principle of exploration, as part of the Federation’s “prime directive”.  The show espoused ideals of critical thought, intellectual curiosity, sense of humor, love, passion, close bonds of friendship , and it re-enforced concepts of conservation, respect for the land and resources, respect for culture writ large.  There was something else that had a profound impact on me. Star Trek let me know as young black child, that I too belonged in this amazing future. And it did so every week with the very presence of Nichelle Nichols, as Luietenant Uhura. There were other black guest stars playing high ranking Federation officials  and various background players as Star Fleet cadets that affirmed the message. It was the early 70’s when I discovered the short lived 60’s Star Trek series in syndication.  The bridge of the Enterprise with its crew, looked like my neighborhood of Adam’s Morgan in Washington, DC.  It looked like my grade school class at Oyster-Adams Bilingual School with it’s diversity.  Lieutenant Uhura was a browned skinned woman of East African descent, she spoke Swahili in fact, and she looked like my mom.  Not exactly like my mom, but she certainly could have been one of my mom’s friends.

At that time there was no real astronaut, nor was their any fictional astronaut or sci-fi commander in any film or TV show that looked like my mom.  It’s an old story, but still relevant.  As children,  when we see ourselves represented as humanity in the mythology, when we recognize ourselves in literature, in the popular culture, and of course in the establishment of the real world, we gain confidence. We blossom.  It's a new day and at my last check, there have been five African American female NASA astronauts who have flown in space. There are three more in the NASA corps at the ready. That’s  8 black female astronauts.  Lest we forget,  Star Trek’s affect on pop-culture, was so great that NASA named the first space shuttle “Enterprise”, entirely because of the popularity of the show.  I recently found out that Nichelle Nichols at one point, actively recruited African Americans for the space program at NASA's request.  I’ll bet the farm, that most, if not all, of those 8 black female astronauts, saw Nichelle Nichols at some point and saw themselves in her, despite the fact she was an actor and not and an actual astronaut. That's how these things work.  That is the power of myth. That is the power of television, that is the power of storytelling.  Whether it was the original series or one of the 6 sequel films, she starred in, I'm sure that Lt. Uhura poised at that communications console, with her wireless earpiece, inspired by these women in some form or fashion.

There is a legendary story about how Nichelle Nichols was ready to leave Star Trek because she felt that her character was not given enough to do.  She got a phone call one day on the set of Star Trek and she immediately recognized the unique voice on the other end. It was a call from Martin Luther King who urged her to stay on the show.  He told her that her very presence was changing lives, inspiring so many black people, so many little girls to dream big dreams, allowing us as black people to be seen in a different way.  It was a crucial time for black people in America. As the saying goes in the theater,  “there are no small parts only small actors”,  and Ms. Nichols was not a small actor.  She played Lieutenant Uhura with purpose, power, passion, and substance.  Lt. Uhura had an inner life. She was real. For real, for real…. Rest in peace Nichelle Nichols. Rest in power.  Thank you for what you and your Star Trek family of actors, creatives, and artists gave us.  You changed this little boy’s life and countless others I’m sure.  You helped me become the artist and working professional that I am today. I saw you and I knew all things were  possible. 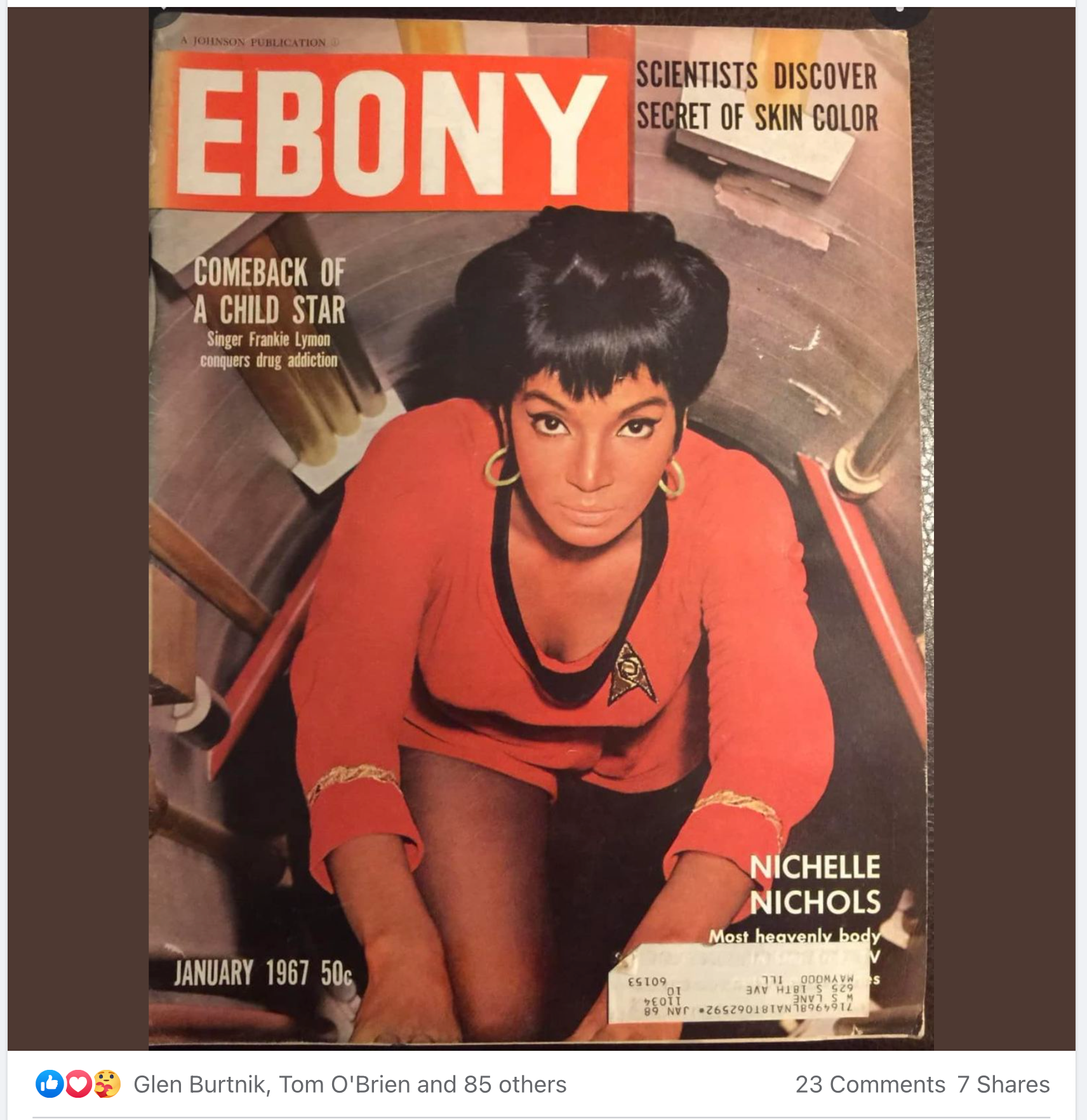