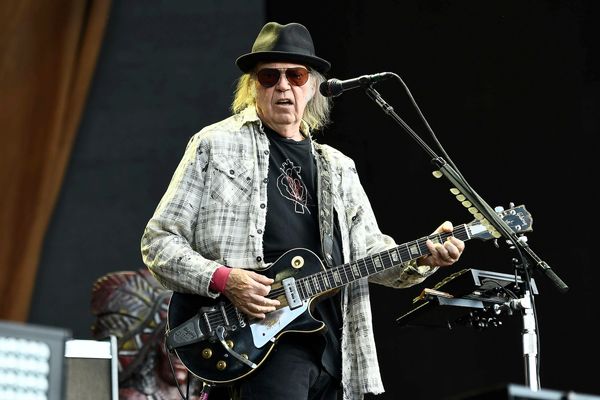 I have always admired musicians and artists who feel a responsibility to seek and promote truth, to get into "good trouble", and to "do no harm".  I have aspired to be that kind of artist for my entire career.  There is a trust that gets developed between you and your audience. I would say it’s sacred.  I applaud Neil Young for his decision to follow his conscience and remove his music from Spotify in protest of Spotify’s promotion of unproven conspiracy theories and scientifically inaccurate data on COVID by Joe’ Rogan on his Spotify podcast.  That is using your legacy, your power, and your rock prowess, for the greater good. The issue for me, is not whether or not Joe Rogan, a lay person, a undeniable Youtube sensation and former comedian, with no formal  training in virology or medicine, has the right to say things that are unfounded and potentially harmful to the millions of people who trust him. There's no question there. He does have that right. So do you, and so do I. The KKK also has the right to say what ever hateful things they like about my people. That is not a crime.  That is the double-edged sword of free speech.  I'll defend that until my end.

Joe Rogan was a comedian who did an amazing transition to Youtube host and he’s been extremely successful.  In fact that’s part of the central issue here. Joe Rogan is paid about 100 million dollars by Spotify.  Spotify now owns the  exclusive rights to distribute Joe Rogan's podcast. They are responsible for what they distribute.  I don’t begrudge Joe Rogan his success. I’ve watched him before and enjoyed his show, but we’re in the middle of a pandemic and people are drinking disinfectant, and ingesting horse dewormer because their favorite media star suggested it.  That’s what Neil Young was objecting too. I object to it as well. It galls me.  The question is what do we do when dangerous speech threatens the masses?  Well, first we ask nicely if those people will reconsider their position, have a discussion and entertain some other ideas and facts.  When that doesn’t work, we use what power we can garner to call out dangerous misleading speech and expose it.  We counter it with truth, facts, sunlight, compassion and understanding. We can turn our backs 180 degrees on those spewing that dangerous speech.  We don’t have to support it. That’s our right too. We can walk away and give it no oxygen.  We can also, in cases like this, “defund it”.  That’s what Neil Young chose to do.

The victory here is two-fold for me. First, Neil Young (Reprise Records) followed his conscience, and in doing so, he summoned the "socially conscience artist Kraken".  He pulled his music from Spotify, Joni Mitchell, and Nils Lofgren joined him, Foo Fighters and Barry Manilow where gearing up to follow suit.  The silence of any prominent black or latin artists in this discussion is not lost on me, but not surprising either.  That is another very nuanced discussion, but I digress....  As of today Spotify is now placing a disclaimer on the show with directions to actual scientifically sound COVID-19 information and Joe Rogan has issued an apology and pledged to introduce a greater variety of sources on his show and to not only follow the conspiracy theory narrative for example.  Done and doner!

Joe wants his 100 million.  Neil made his point. We’re all better for it.

So that's victory #1.  Here's #2. Our power as musicians and recording artists is constantly being undermined. If you follow the music industry at all,  you know that even legends like Neil Young, Mega-stars like Jay-Z, all of us who do this for real,  with our music on Apple Music, Spotify, Amazon, YouTube, Pandora, and on and on….are being robbed by streaming platforms. What we do, our actual product, recorded pieces of music... has been devalued to a horrific extent.  We get fractions of a cent for every stream on Spotify, compared to when we actually made dollars on a record, albeit many of those deals were bad, they were not “fractions of a cent on massive hit albums” bad.  Legends like Steely Dan cannot live on their royalties any more.  Seventy-year old artists with massive chart topping hits have to tour to live.  It's a crime.  What Neil did, reminds us of our power as recording artists though. You could argue that both Neil and Joni weren't making that much money off of their music being on Spotify to begin with, so it wasn't a big loss for them any way... but guess what?  Spotify is.  Spotify is making tons of subscription money off of Neil and Joni, and they NEED those artists. They need great content.  So, again Neil, you rock as you always have, and you showed 'em who's really boss. That's putting your money and your reputation where your mouth i . That's standing for something. That's getting it done.

Keep on rockin' in a free world.

CHECK THE ROLLING STONE ARTICLE ON THE SUBJECT HERE: